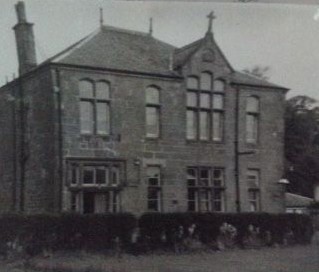 History of St Martin of Tours

The history of St Martin’s began over 100 years ago, as circumstances in the Vale of Leven combined to ensure that the people of Renton needed a focal point for Catholic worship that they could call their own.
The mother parish in Alexandria was founded in 1859 but, with a large increase in the catholic population, Archbishop Charles Eyre was advised to open a second parish in the district. In response, he appointed Fr. David Murie in 1887 as Renton’s first missionary rector (parish priest). Fr Muire resided with Fr Gallagher, the missionary rector of Our Lady and St Mark’s, and working tirelessly collecting funds for the construction of a chapel, school and chapel house in the village.
The acquired site was blessed by Fr Gallagher and, on 6th August 1898, Mr W.E.Gilmour of Alexandria, was invited to cut the first sod for the chapel-school and presbytery. He performed the task before a crowd of 3,000, with a silver spade, which was displayed in the church hall. Speaking afterwards Mr Gilmour acknowledged that the church in Alexandria was too small for the needs of the congregation and said: “the next step will be the erection of a Roman Catholic Church in Renton”.
The owner of the land on which the chapel-school was built, Mr W.S.Turnbull, was a non-catholic, but welcomed the construction of a church. He said, “the Catholics are only doing what every denomination should strive to do, namely to improve the morality of the people and, towards this end, education is the first step”.
Father Murie was given charge of the new parish of Saint Martin of Tours and he took up residence in August 1899, when the presbytery was completed and the chapel-school was ready for use. The parish was a central part of the community from the moment of its inauguration, with the first baptism taking place on the 6th August and the first marriage on the 15th August 1899. Six month later; on 26th February 1900, the school was opened.
In 1925 a parochial hall was erected; however upon completion it was decided to use it as a temporary church. Although it remained the church for 45 years, the move freed the chapel in the school building for educational purposes. Thereafter, local children continued to be taught in the chapel-school until 1967 when, on 28th August, His Grace Archbishop James Donald Scanlan of Glasgow, opened the present St Martin’s Primary School. He returned to bless the new building on 7th February 1968.
In the late 1960s, Fr Michael O’Sullivan began to explore the possibility of constructing a new church for the people of Renton. His vision gradually became a reality and Archbishop Scanlan formally blessed the foundation stone of the new church on 25th May 1970.
Work on the church was completed in the winter of 1970 and Archbishop Scanlan solemnly opened the current church on 13th December. The Archbishop then celebrated Mass in the presence of Bishop William Hart of Dunkeld, the Vicar General Bishop James Ward, Fr O’Sullivan and other invited priests.
In his address to the people in the souvenir brochure that marked the occasion, the Archbishop wrote: “I congratulate all concerned in the noteworthy achievement, in particular Fr O’Sullivan for whom today is the happy realisation of a long cherished dream and whose tireless zeal has inspired such wonderful cooperation from his parishioners”.
On December 13th 1995, the parish celebrated the silver Jubilee of the opening of the new church. This was also the occasion for the Solemn Dedication of the Church by His Eminence Cardinal Thomas Joseph Winning, Archbishop of Glasgow, who concelebrated a Mass of Thanksgiving with Fr James Simcox and several visiting priests. As a consecrated building, St Martin of Tours is now a sacred place of worship for all time.
St Martin’s remains one of the Archdiocese’s most beautiful modern churches and will, undoubtedly, continue to inspire its congregation, within and outwith Renton.
Scroll to Top